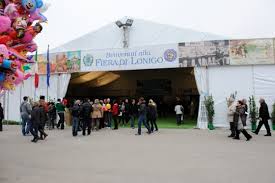 From March 18 to March 21, 2016.
Over 100,000 visitors to the 529 th edition of Leonicena fair, one of the oldest in the Veneto. Despite the crisis also numerous exhibitors.
The “LONIGO FAIR” draws its origins from ancient folk and religious traditions south of Vicenza.
In fact, it stems historically from 25 March 1486 (before the discovery of America) and according to the story that has been handed down was the adventure of two thieves killers who hid themselves in the small Church of St. Peter, located in the hamlet Pavarano (now Madona Lonigo) and here, the miracle happened: one of the two criminals disfigured the wallaper of Our Lady “who took cover the injured eye with his left hand, while his right leaned over the wound he had had in his chest.”
From this extraordinary and miraculous, the church was dedicated to the Madonna of Miracles.
Moreover it was Pope Innocent VIII that by His will, he built on the site the “Sanctuary dedicated to the Madonna of Miracles” and who for over three centuries, the fame of the miracle, was attended by the faithful, coming even from distant countries, for venerate the Madonna.
And it is precisely from the encounter of these faithful, who exchanged their goods, which was founded the first form of the “FAIR OF LONIGO that later in 800, moved by the Lonigo Mura, became famous especially for the exhibition and trade horses.
LA “LONIGO FAIR” of our day
Since 1986, the year of the 500th Anniversary (1486-1986) see the Logo-round the commemorative symbol, Fiera di Lonigo has regained its central role in the economy of the whole area Berica Area, Vicenza and Verona.
This role, alive and dynamic, is reconfirmed every year the last week of March, through the growing participation of operators and exhibitors, in particular that of the mechanics applied to the cultivation and exploitation of agricultural land. In recent years the exhibition has taken on a dimension and a specialized aspect especially for the wine sector and gained the potential of agricultural machinery, to which has been added with considerable presence of handicraft and local trade products.
And these are the conditions that characterize our people, hardworking and always attentive to the great transformations, which does the job its significant dignity and way of being.
With Fiera di Lonigo, the leoniceni do party only for themselves, but they do together with the great influx of visitors to the event every year attend our Town.
Moreover Lonigo also offers visitors how splendid reality as a City of Art and Culture, with its buildings, its monuments and its Venetian Villas buildings (La Rocca Pisana, Villa S.Fermo, the Teatro Comunale, the Villa Pisani in Bagnolo the Cathedral, the Old Church, the Sanctuary of Our Lady of Miracles etc.)
Finally, there are, as a worthy setting, manifestations of cultural-historical and artistic.
Are especially welcome with a gastronomic initiatives, by allowing you to taste the typical products of the Venetian cuisine, accompanied by the famous local wines D.O.C. .
The city of Lonigo in this month, opens with profit to European opportunities and among them mention should be focusing on the friendship with the City of Abensberg, Bavarian tedesca- city, twinned with Lonigo, who for many years regularly participates in this event, with their music and their beer, bring a festive note and diversity.