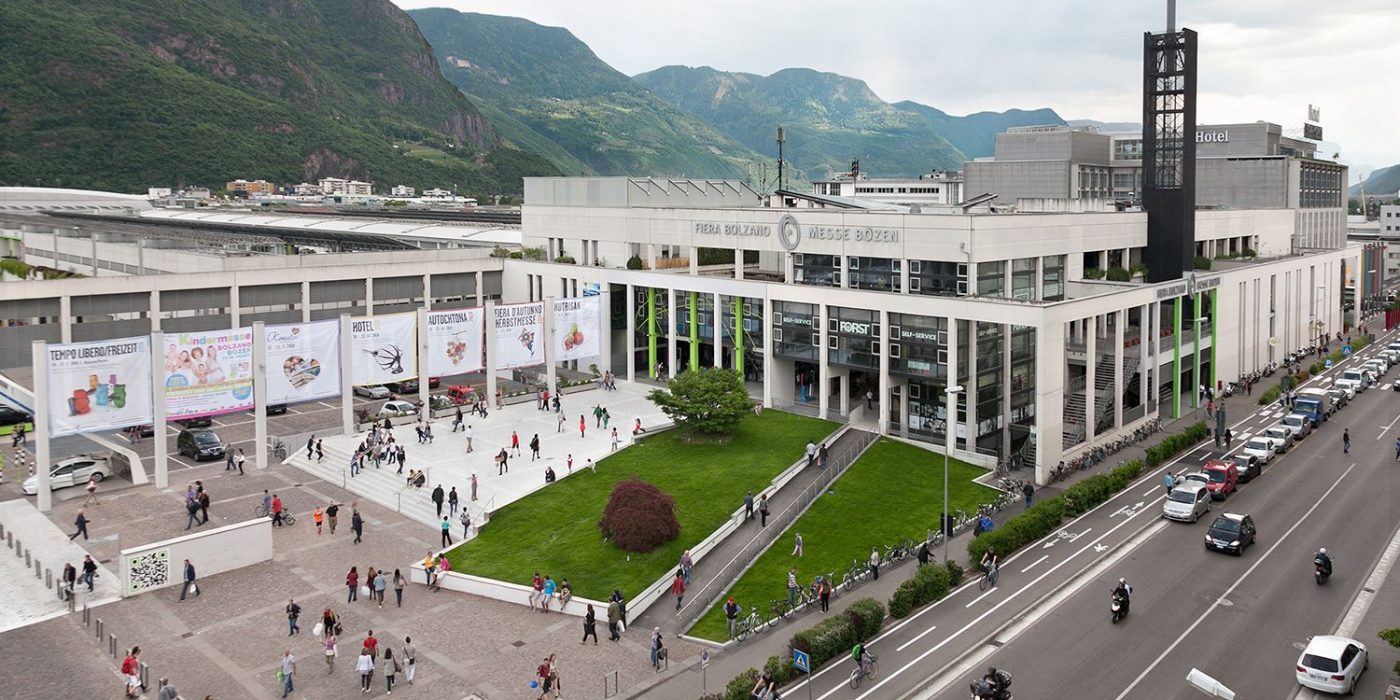 Located in a bilingual region, Bolzano Fair serves as a meeting point between companies from the German-speaking areas of northern Europe and those of the Italian language.
Our events focus primarily on issues where the Trentino Alto Adige region boasts skills and know-how recognized at national and international level:
Tourism and hotel reception
Alpine winter sports and technology
Alpine agriculture and industry
sustainable construction and renewable energies
Bolzano Fair annually attracts with its manifestations more than 3,000 exhibitors and over 230,000 visitors from all over Europe.
Bolzano has an old tradition in the fair: the first evidence of trade with the Alpine regions, not just Italian but also foreign, date back to 1070. The geographical position of the city and its unquestionable role as a bridge between the north and south Europe have always favored commercial, economic and cultural relations with neighboring countries. The first modern fair – the Trade Fair – took place in 1948.
In the ’70s, thanks to the favorable economic situation, began a phase of development for the Bolzano Exhibition Authority. Prompted also by the various economic categories of the Province, administrators of the decided to expand the program of exhibitions, creating a series of specialized exhibitions. I was born the “Agricultural Fair”, the “Bolzano Hotels”, the “Leisure” and “Office-Büro”. In 1983 he followed “Mitea” – which in 1991 became “Bauschau” trade fair for the building, construction, insulation, thermology – in 1984 were added “Lignomec”, specialized exhibition of machinery and products for woodworking and the “Exhibition of Art and Antiques”.
By the time they were organized specialized exhibitions in the most important economic sectors of South Tyrol, to allow both the demand and supply meet both the exchange and dissemination of know-how: Mountain technology and winter sports ( “Alpitec” in 1997 “Prowinter” in 2001 and “Alpitec China” in 2009), agriculture and apple cultivation ( “Agrialp” in 1971 and “Interpoma” in 1998, “Agridirect” in 2016), tourism, hospitality and food ( “Hotel” in 1977 “Autochtona” in 2004, “Biolife” in 2005, “Nutrisan” in 2012).
Since the two thousand years a series of exhibitions “Klima” dedicated to the theme of sustainability and energy efficiency: “Klimahouse” in 2006 with editions in Italy travel to the North ( “ComoCasaClima” in 2015), Center ( “Klimahouse in Tuscany 2014) and South ( “Klimahouse Puglia” in 2012), as well as “Klimaenergy” in 2008, “Klimamobility” in 2011 and “Klimainfisso” in 2013.
A major presence in the calendar is certainly represented by the various public exhibitions: in addition to the historical “Free Time” (1983), “Furniture” (1992), “Civil Protect” (2007) and “Kreativ” (2014).
From 1 January 2003 Bolzano Fair it is a joint stock company and has adapted well to the European legislation that has long demanded to our country by reviewing the various rules relating to both State and regional trade bodies. The main shareholders are the Autonomous Province of Bolzano (about 62%), the Trentino Alto Adige Region (21%), the Chamber of Commerce of Bolzano (5%), the City of Bolzano (4%) in addition to the reduction in the amounts of Foundation Savings Bank, People’s Bank of South Tyrol, Trento and Bolzano Bank, Raiffeisen Bank and other associations.
Our trade fairs and congresses are inspired by our culture of sustainability, which is also part of the esteem we have for our staff and the commitment to defend the environment. We want precisely this culture of sustainability is central to our future efforts, making it the launching pad for new proposals and exhibition formulas. In addition, we are convinced that we will be successful only planning initiatives that will not burden or on our employees, or the environment. That’s why we believe in the value of interpersonal relationships based on mutual respect and fairness, both within us, as to customers and suppliers. Our corporate culture is focused on the harmonious and fruitful collaboration among all our employees, belonging to different linguistic groups in South Tyrol or from other regions and countries and made sure that bilingualism will become for everyone a factor simply granted.